HERE ARE SOME OF THE HUNDREDS OF IMPRESSIVE TESTIMONIES OF CHRISTIAN SCIENCE HEALING THAT HAVE BEEN POURING OUT OF AFRICA FOR YEARS .​

Thank you for contacting us! If needed, you will hear back within 48-72 hours.

"The word of God is quick, powerful and sharper than any two edged sword piercing even to the dividing asunder of soul and spirit and of joints and marrow, and is a discerner of the thoughts and intents of the heart." (Heb. 4:12).

Last year a friend of mine was suffering from a cyst that had troubled her for some time. Then she suddenly became serious and was rushed to hospital where she was operated on and the cyst was cleaned.However, instead of getting healed, she got worse. The doctors made a further internal examination in her stomach which established that she had a perforated intestine which passed food into her stomach walls instead of passing it out.In their opinion she was supposed to be operated on again to drain all the food which had been stored in the stomach walls. She stayed in hospital for almost two months without gaining permanent relief or healing.

At that point,she telephoned me asking me for Christian Science treatment.Not wishing to neutralize the treatment she was  getting in hospital,I did not specifically pray for her but from that moment onwards I held in thought the thought that man's identity is forever complete and it this identity could never be invaded in any way. I insisted that all on whom my thoughts are resting upon were being benefitted even if they were not specifically asking my help.  I also worked with this statement from Science and Health With Key to the Scriptures by Mary Baker Eddy, "The testimony of the material senses is neither absolute nor divine." (269:21)  It helped me to see that matter is essentially unreal and therefore conclusions based on whatever it seemed to be could not be relied on.

A few days later she was taken to the the theatre room so that the doctors could find the root cause of the perforated intestine but they could not find it. The intestine showed no sign of ever having a hole. There were no signs of ulcers in her stomach. The doctors were surprised by this latest development and concluded that it was God only who could have healed her to the joy and surprise of the patient as well.

The patient also had a wound which would not heal which had been caused by a previous operation she had had. The doctors told her to continue whatever she was doing spiritually for the healing of the wound whilst they weighed their options. She phoned me again for treatment and this time I handled the issue specifically and affirmed adhesion, cohesion and attraction were qualities of Mind (God) and could not be interrupted in any way because she lived forever in God where she lived and had her being. I recognized her as God's spiritual image and therefore glorifying God.As I did this mentally,  I felt God's love for His creation. I knew that God would never send disease to His precious child nor ever know anything about it.  Three days later the wound from the operation closed and she was completely healed.

I am so grateful to give this testimony which confirms that the efficacy of Christian Science treatment!  God is indeed Love!

Our donation page is a 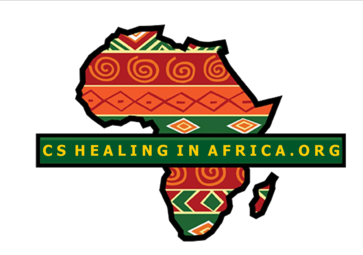 Would you like to receive our eNewsletter? It contains outstanding testimonies from Africans healed through Christian Science.

Simply complete the form below:

A relative called for help after her son had spilled boiling water on himself.  His entire leg was wounded.  I told her that her son would be fine, knowing very well in my mind that the wound was a lie, for "Accidents are unknown to God, or immortal Mind...” (S&H 424:5).  And because man is God's image and likeness, there is no way man can be involved in an accident which his Creator knows nothing about.  God never created that which is unlike Him.

Because she had experienced some healing before, she had so much faith in God that she never took the boy to the hospital which would seem an obvious choice to many parents.  In my short prayerful work, I reasoned that since God, good is the only cause, an accident has neither cause nor reality and because of that, it couldn't have any effect.  It is simply a lie of the seeming personal sense.  I stood firm in my consciousness that the boy's mother knew that he was always perfect.  No power could cause any harm or pain, for God is the only power.

The next day she said he had been crying the whole night.  I refused to accept that my prayer work was in vain.  I demanded to see the perfection which I knew was there.  As the day progressed  the mother reported that the boy was playing with other kids, like nothing ever happened.  Within a week the boy was completely healed.

The healing surprised many people in the neighborhood.